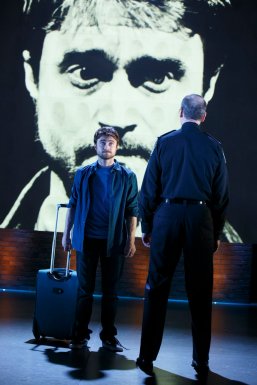 I want to give Privacy, now playing at the Public Theatre all the privacy and secrecy it deserves (they’ll explain the difference). And that you as an audience member deserve as well.  So this review of the brave and talented Daniel Radcliffe starring in James Graham’s new play will be about as vague as can be, while still telling you about this funny and deeply disturbing look at our world and the false sense of privacy that we may or may not be deluding ourselves about.  We, the audience, before the show even begins, are given some instructions that are both creatively told and uniquely intriguing. Fantastically directed by Josie Rourke (who is also given co-creator credit with Graham

) the play begins when a young British man, Radcliffe (who is simply charming and wonderfully natural), seeks some personal answers to the world of interactions, relating, and emoting vulnerabilities.  He’s trying to figure out who he is and what is wrong with his turned-off self.  A broken relationship and a breakdown of sorts sends this lonely man to a psychoanalyst where the conversation and exploration begins.  And what a fascinating journey spirals out from this moment as he travels to New York City to learn about himself and what our technology choices and social media interactions means for us and others.

The cast is smart, funny, and totally on-point as they each inhabit numerous real and imaginary characters who help Radcliffe’s character learn more about himself and the connectivity of this modern age of cell phones and computers; google and loyalty card, that surround all of our lives. Every one of these actors are a joy to behold; Reg Rogers, Rachel Dratch, Michael Countryman, Raffi Barsoumian, and De’Adre Aziza do wonders with their respective material, being witty and direct.  We are on the journey as well, learning and

experiencing many surprisingly, hilarious, and disturbing information.  The telling is engaging and exhilarating, and the set design (Lucy Osborne), costume Design, (Paul Tazwell), lighting design, (Richard Howell), and projection design (Duncan McLean) is wildly perfect and modern. And I’m thrilled that I had the chance to be a part of all that goes on in this artful and clever play.  Kudos to Harry Davies, the Onstage Digital Researcher, who sits on stage in the corner working his magic, both light and dark.  And that is all I will say about this play.

Get a ticket and go experience something that will change the way you look at your world and your phone.  Did I say to much? Have a given away too many secrets? Destroyed the privacy of Graham’s Privacy? I sure hope not. Because I don’t think I can Undo this message now…. 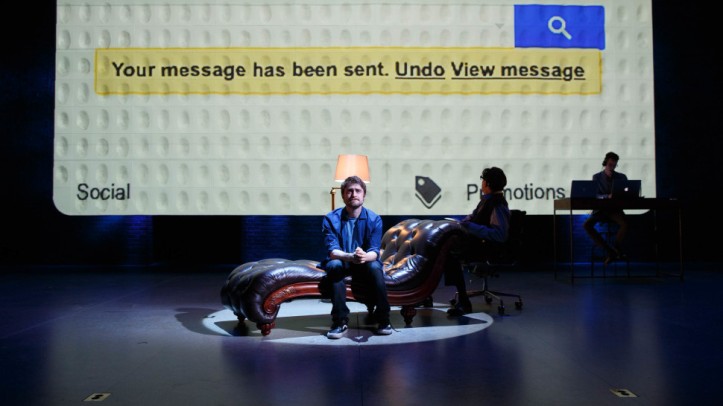