The Profane: Compiling Clues in the Hopes to Understand

The Profane: Compiling Clues in the Hopes to Understand

By Ross
There is an immediate connection to the father figure that opens Zayd Dohrn’s The Profane at Playwrights Horizons. And there is also curiosity. His behavior in the first five minutes register as profound and meaningful reactions to something that has happened or is about to happen.  Something that he has to figure out how to cope with. We just are not privy to the knowledge of what that thing is quite yet. As directed by Kip Fagan (Roundabout Underground’s Kingdom Come), the answers aren’t easy and they certainly aren’t spoon fed to us. They trickle out to our inquisitive minds wrapped in vague clues and obscure references without categories or details given. It’s an arresting notion that keeps us leaning in and paying close attention for the tidbits that are doled out subtlety that make this play such a compelling creature.
The father, Raif Almedin (a strong and gifted Ali Reza Farahnakian), a first generation immigrant is safe and sound in his liberal enclave of the West Village of New York.  His daughter arrives home, a pretty young woman named Emina played with precision by Tala Ashe with what appears to be her boyfriend.  Raif ignores his greeting, his out stretched hand, and his whole presence essentially, which is the first of many clues that this is where the conflict resides.  The conflict itself is not obvious or apparent.  The young man’s name is Sam (well played by Babk Tafti), polite and nervous to find him in the house of his girlfriend’s parents, the play offers no immediate reasonings that would cause this impolite behavior. So we wait.  One by one the others enter-  Emina’s mother, the embracing Naja (a solid Heather Raffo) and Emina’s sister, the wilder Aisa (the engaging Francis Benhamou who also plays double duty as a very different kind of woman, Dania in Act II).  Once the whole family have all gathered into this warm living room, we sit back waiting for the other clues so we may discover what the ever increasing tension is all about.
This is a play similar in kind to the more straight forward Guess Who’s Coming to Dinner, the 1967 film starring  Spencer Tracy, Sidney Poitier, Katharine Hepburn and featuring Hepburn’s niece Katharine Houghton that portrayed a (then rare) positive representation  of interracial marriage. In The Profane, it isn’t about race, but about faith, and the intricate details of religion that place those born into the same construct sitting at very different ends of the active belief spectrum. This liberal family is going to have to come to terms with their daughter, embracing with the openness that she was taught and utilizing all of the free will given to her, as she announces to her family that she has fallen in love with Sam. It is only soon after do we find out that his young man is from a very conservative Muslim family from White Plains, and this does not sit well with her father, a man who left behind his Muslim beliefs when he immigrated to America so many years ago.
Act II takes us one step beyond that ground breaking 1967 movie when we, along with Emina’s parents, travel to meet the entrepreneurial immigrant family of Sam. Raif and Naja reluctantly drive out to White Plains for an afternoon meet and greet with the future in-laws for a backyard lunch.  Sam’s parents, the earnest Carmen, portrayed clearly and exacting by Lanna Joffrey, and her husband, the jovial and kindly engaging Peter, (a wonderfully precise performance by Ramsey Faragallah) are not what we imagine.  From the dialogue in Act I, I was expected a more rigid father but Peter is nothing like I had envisioned. It is here in their lovely appointed suburban home (impeccably detailed design work by the team of: set: Takeshi Kata; costume: Jessica Pabst; lighting: Matt Frey; sound: Brandon Wolcott) that tolerance is pushed to the limit and all the prejudiced notions of the other are launched forward when everyone is shoved beyond their threshold.  It’s a sharply constructed piece and surprising in its authenticity, but not surprising that when confronted by the extreme differences of another, we flail and fall back on prejudiced preconceived notions bolstering intolerance and the opposite of acceptance.
Dohrn had me completely entwined in the conflict as it slowly unfolds in this quick two act play.  I found myself leaning in to catch every clue and subtle re-attunement that these two families have to make within themselves and with each other.  But the final scene threw me for a loop.  There is a sweet dynamic between the two characters in the final scene (I won’t ruin it for you with details), one drenched in love and care, but I can’t quite wrap my head around what Dohrn is trying to say. There is something about the shift of faith that an immigrant may have when arriving in America for the first time.  You can feel that the meaning of these final few passages are heavy with importance but the clues aren’t there to fully comprehend.  Maybe I wanted a more neatly wrapped up wedding present that showed resolution and a breakthrough. And maybe that’s the point, that these moments don’t get a simple nor an easy conclusion. That faith and love are two things that never arrive or end in a clear or understandable way.  I felt letdown by the final moment as if I missed the prize. It’s a beautifully read passage from one of Raif’s novels but my wish is that after all the clues that were so meticulously compiled over the course of the play, we understand something a wee bit more.  But yet, here I was, after all those clues, feeling like I was left unresolved. 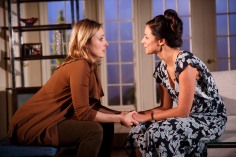