Steppenwolf and Second Stage Move Us into Linda Vista

Helping move someone into an apartment eight shows a week is a trial for any friend, new or old, and in Steppenwolf’s production of Linda Vista, as they bring in the boxes and the rug, we feel for the kind hearted friend, Paul, played wisely by the excellent Jim True-Frost (Broadway’s Buried Child). His buddy, the central character in this funny detailed exploration of middle-aged desperation, is a bloke named Wheeler, strongly portrayed by the forceful Ian Barford (Broadway’s Curious Incident…) and he, in a nutshell, is no picnic to engage with, even when not age-inappropriately dressed. As written with dynamic energy and force by the expertly aligned Tracy Letts (August: Osage County, Mary Page Marlowe), Wheeler is one of the more difficult people to want to spend time with, let alone more than two hours. Somehow though, much to our surprise, this dark comedy finds its way to respecting itself, giving us a lot to laugh and connect with, even when the dynamic is somewhat forced, sad, and/or pathetic at times, with a leading man that is a complete and utter Dick, and not just by his given name. Although, this is “just my point of view“, and not “an objective truth“. 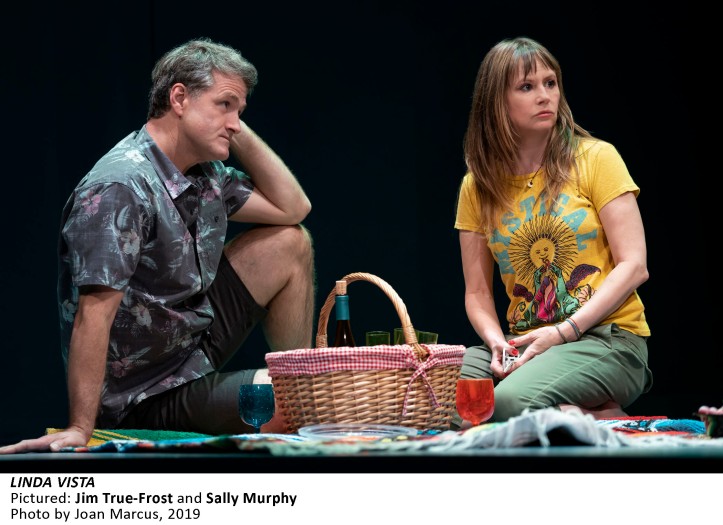 As directed with full-frontal force and deliberation by Dexter Bullard (Broadway’s Grace), this mixed bag of toxic masculinity and comedic midlife crisis revolves around the impossible Wheeler and the interactions he somehow has with the women in his life, all basically orbiting around that two bedroom apartment in a typically dull development called Linda Vista. One has to wonder if these interesting women have no standards or respect for themselves giving this man the time of day, even if, or especially because one has a Masters Degree in Happiness? Or are there other more compelling reasons for them to continue to interact with this disastrous male piece of work? He doesn’t seem all that likable, saying all the wrong things, even when he’s right, nor does he like so many things that other people like, a passing thought I can fully relate to when discussing karaoke. But when the delightfully fun and engaging Jules, played to yogi-optimistic perfection by Cora Vander Broek (TimeLine Theatre’s All My Sons) sees in him a turtle who has lost its shell, I wonder about all the bad choices made in our “Barry Lyndon” love-lives. One would hope, that through introspection, which he does not seem to have, these women might try to shed some light on their own internalized fear and inner respect, and stay clear of the damaged soul that lives in Linda Vista.

The script of this unexpected multi-dimensional love affair sing in a way that the karaoke ballads that bring the two central figures together do not. Forcibly set up by Wheeler’s married friends, Paul and Margaret, eclectically portrayed by an empowered Sally Murphy (LCT’s Admissions), the blind date relationship disaster-in-the-making between Wheeler and Jules unwinds in a hilariously bizarre interpersonal dynamic, making the line “you don’t understand” ring far truer than maybe intended.  It’s surprisingly authentic, that first romp, in its intimate mess of connection, feeling true and awkward within minutes of the other. That is, until a late night knock on the door by the troubled neighbor, Minnie, played clearly by the wonderfully dysfunctional Chantal Thuy (DC’s “Black Lightning”) who has, in Wheeler’s own words, “that runaway look”, throws the apartment into a disordered home for the lost and stranded. Some of it is heartbreakingly authentic,  mostly in the first half of this long winded but well written play, while other moments that come later flip quietly into creepy fantasy and masculine wish fulfillment that feels a little too haphazard to swallow.

Rotating around the different aspects of Wheeler’s hard to fathom life as he attempts to learn to love where he finds himself, Linda Vista, succinctly designed by Todd Rosenthal (Broadway’s Straight White Men), with detailed costuming by Laura Bauer (Broadway’s Top Girls), strong lighting by Marcus Doshi (Steppenwolf’s Familiar), and solid sound design by Richard Woodbury (Broadway’s Talk Radio), attempts to give each story a beautiful inhalation of fullness and gravity. Exposed and developed with integrity, Linda Vista takes its time giving you more than just an examination of one man’s obnoxious journey to find his formulation and function in the world. He finds understanding and interest in the female counterpoints, and digs in solidly. The strong willed Anita, determinedly portrayed with authority by Caroline Neff (Broadway’s Airline Highway), even when given an auxiliary placement within Wheeler’s work place, a camera shop that doesn’t ever seem to have a customer, finds the depth of details to wind out her story. “I’ve managed a lifetime of Michaels“, she says, letting the distraught Wheeler know that, although she appreciates his attempts at kindness, she is fully capable to handle the world around her. It’s not easy, as we see within the disgusting moments of hearing the ugly demeaning words spewed out by the oblivious bossman, Michael, carefully played by a wise Troy West (Barrow Street’s Bug) who barely registers an understanding that he is being entirely inappropriate on so many levels. In Anita’s struggling and steadfast eyes, he is just another obstacle she has had to navigate in order to try to remain sober and strong. 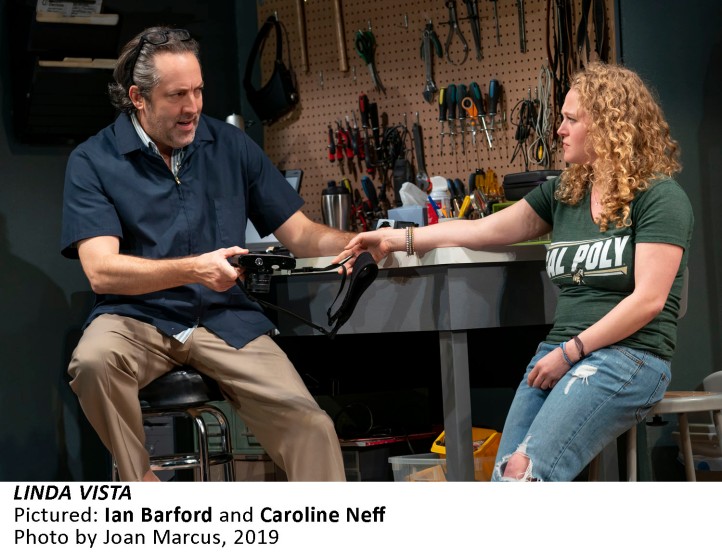 Letts has the most compelling manner with a turn of an angry or intriguing phrase and the dig of privilege and power over those around, particularly in the land of Linda Vista. From his fascinating destructive force named Wheeler to the women who seem to gather around him, I’m not sure I would be loyal to his persona, and I might pretend to be busy with any other obligation if he called to ask for help when moving out from his family’s garage into his own apartment. Although I wouldn’t have to worry, as Wheeler wouldn’t be surprised or shocked. He would probably do the same thing, unless you are a woman that he finds somewhat appealing or one that he can play ‘white knight’. He works hard to keep them around him, and oddly enough, as his friend says with amazement, he has an extraordinary luck with these women. I personally found all their stories fascinating, and intriguing, but when Wheeler finally limped off into the California sunset, I was glad to say good bye.  He may be a liberal, loud mouthed and self righteous, but he is one difficult Dick to be around.