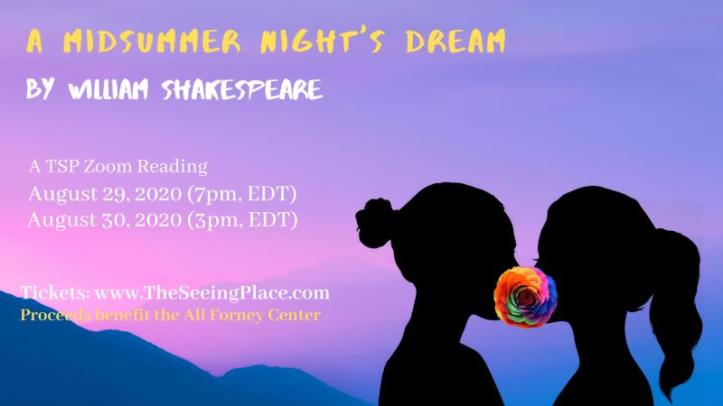 The young lover couples in The Seeing Place Theater‘s A Midsummer Night’s Dream are really the driving force of this production, and in my eyes, every production of this fantastically sweet Shakespearean play. The Seeing Place has set out with this streamed production to play with the idea of gender and non-conformist love, reformulating one of the lover couples as two women, thus adding a layer of critical societal engagement with lesbian love and non-binary concepts. It’s a clever LGBTQIA+ twist, bringing in a conceptual layer of homosexual homelessness as a theme, lost in the woods with no place to call home, that ricochets out into the organization that is benefiting from this production, The Ali Forney Center. 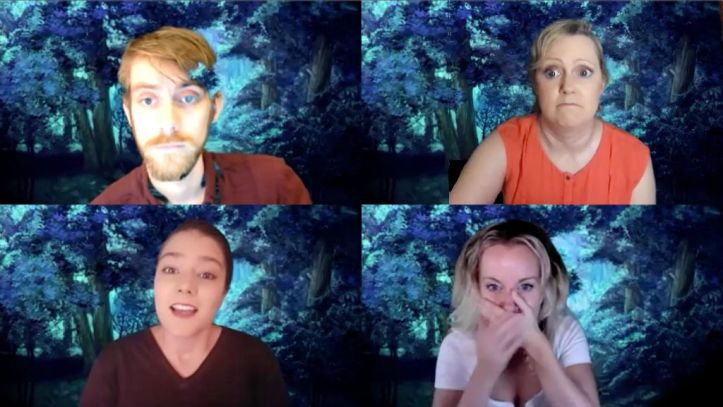 I must admit that A Midsummer Night’s Dream in not one of my favorites. It lingers too long on the company of actors in the woods, and by the time the weddings come to the forefront, as they always tend to do near the end with Shakespeare, I’m pretty much ready to retire for the evening. But the play sadly doesn’t end there, it rattles on, in my mind, with a playfully silly (and somewhat long-winded) production of a play within a play. I think I might have found the antics pleasurable once upon a time, but this being my one hundredth ass-loving fairy queen production (or so it feels), even when it is so gloriously and skillfully staged by Julie Taymor at Theatre for a New Audience or by the Public’s Shakespeare in the Park starring the magnificently funny Annaleigh Ashford as Hermia, A Midsummer Night’s Dream wears me down. 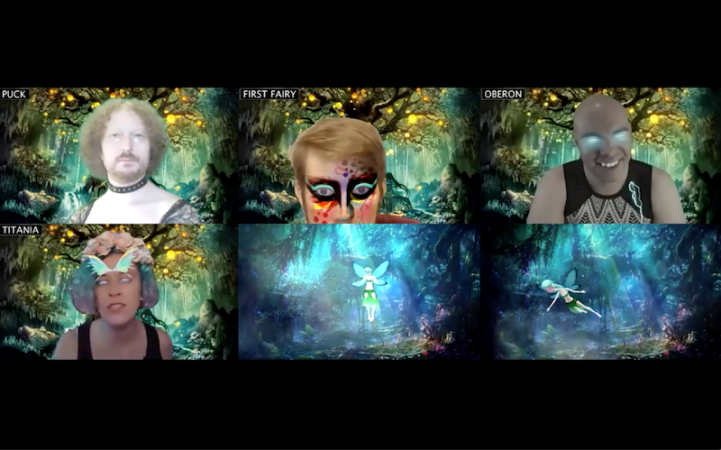 Here in The Seeing Place Theater‘s zoomed-in streamed production, the lovers struggle against, not only typical patriarchy, but also homophobia and some tiresome magical royalty in the woods. Everyone is telling these young lovers how to be and who to love, including the royal government, their controlling parents, each other, and even some magical potions carried by some crazy (demented zoom-created) woodland fairies. Anyone who grew up in the LGBTQIA+ community knows this scenario to some degree or another, so the dynamic of love outside the norms of society plays strong. I just wish there was more to this than casting a female, a very good Weronika Helena Wozniak, as Lysander to be in love with the well orchestrated quirky intense Ellinor DiLorenzo’s Hermia, diving them deep into the messy web of tyranny and prejudice. Pretty much the rest is as Shakespeare wrote it. There is a gaggle of fairies that are said to be non-binary, which is intriguing but underused, while the true main problem with the depiction of the fairies is the disturbing and oddly applied special effects, courtesy of Zoom, that distract more than enhance (especially the small, flying mosquito-like fairy servants). And that oddly constructed moon. 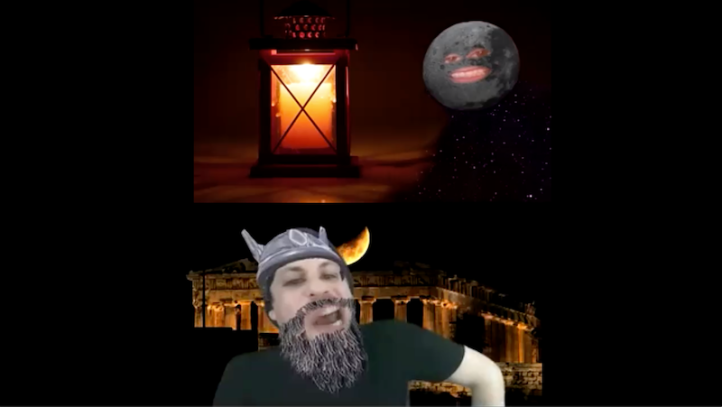 The cast and production team, said to be representing in majority the LGBTQIA+ community do some pretty fine work with the text, fleshing out the fun and driving the piece forward. The standout is, as per usual (cause it’s just the most fun part in the play) Helena, played with infused joy by Erin Cronican,. She is credited as the co-director/digital designer alongside Brandon Walker who plays Theseus and Oberon with a less convincing flair. “The story will be changed,” says Cronican’s Helena who is madly in love with the male Demetrius, played well by William Ketter. So The Seeing Place, an actor-driven company dedicated to exploring the intersection between the actor’s voice and the playwright’s words by reinterpreting masterful works live, alters and investigates humanity and society when their LGBTQIA+ desires of love don’t fit with the world that surrounds them. When lovers have to flee to Athens to find safety and the answers to their prayers.  I sort of wish they somehow found their way past the freaky woodland fairies who turn Bottom, solidly played by Dan Mack, into a character from Shrek when mischief is done in thee zoom-projected wood. And they just found love and marriage as they so desired, but magic gets in the way, turning them around and around in the pesky projected forest.

If you haven’t had your fill yet of Shakespeare’s A Midsummer Night’s Dream over the years, then zoom in to The Seeing Place for another taste. You’ll find cleverness flying off sometimes distractedly with techno-electricity on a winged cupid painted blind. It’s pleasant and fun (at times), and as always, I join with the lost souls in loving Helena outright and forever. We are all fools what mortals be for that strongly created creation. Now let your epilogue alone as there is no need, but know that this Dream is for a good cause.

For a limited time through September 5, 2020, they are streaming the performances on YouTube. Go to seeingplacetheater.com for more information. 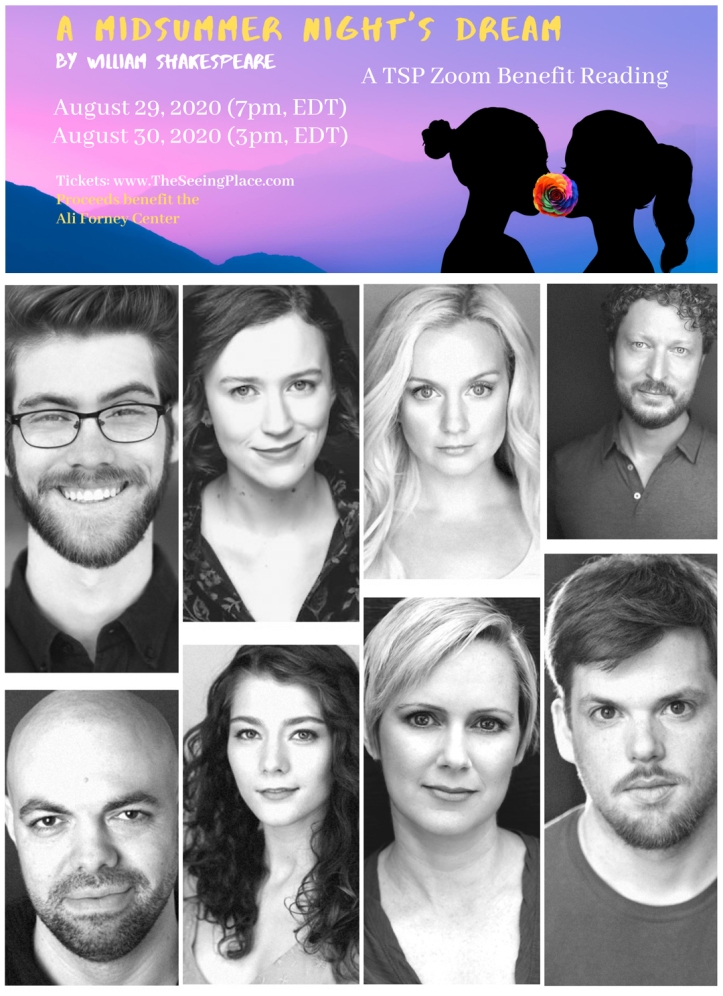