Two young people, one man and one woman, volunteer for a drug test study.  They will be given anti-depressants yet they are not depressed, and we, the audience, along with the psychiatrist will be watching for the effect these drugs have on these two young souls.  This is the set up for Lucy Prebble’s 2012 play, The Effect, directed at the Barrow Street Theatre by the always interesting and acclaimed David Cromer.  It’s an effective trial, one could say, as we watch these two charming characters (Susannah Flood as Connie and Carter Hudson as Tristian) flirt and then fall for each other, intensely and recklessly.  Is this one of the side effects of the drug that causes dopamine levels to rise?  Does it make their blossoming love mean any less if it is drug induced,  as Connie asks Tristian? Or should they not care and just embrace the feeling regardless of the cause, as Tristian suggests to Connie? 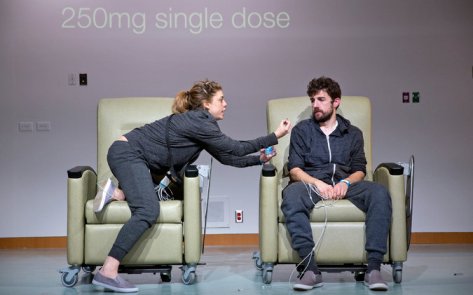 Both actors are fantastic to watch, struggling with their internal monologues of ‘who’s in control?’, and ‘is this real?’. Their passion and intensity as they ride this roller coaster is a study case in what love looks and feels like, and it’s a joy to watch, especially the wonderful scene when they steal away together for a midnight escapade.  Flood is subtle, a bit awkward (adorably so), and wonderful as her life and will are shattered as she tries to understand her mind and her heart, while Hudson as the more bohemian and wild Tristian first rides the waves with abandonment but then deepens into a more desperate level of love, worthy of the study surrounding him.

Mixed in with this is a complex parallel relationship between Dr. Toby Sealey, clinical trial director (a solid and charismatic Steve Key) and the psychiatrist, Dr. Lorna James, (a more complex Kati Brazda).  Within their discussions of ethics and drug testing validity, there lies a more charged debate about whether we are medicating away emotionality from our human existence and interactions.  Maybe we should be left alone to feel or even embrace our depression and sadness (the difference being left a little too simply defined), and find empowerment for change as a possible outcome.  It’s a heady complex topic that sometimes felt too emotional and far too simply debated in maybe a much too contrived setup, but Prebble makes an interesting idea come alive, with lots of questions being asked, but no real obvious answers given. One complaint that was echoed to me by one of my friends, is that the ending as it is, leaves you with a beautiful love story followed by a sour taste in your mouth.  If these two moments were reversed, you’d get it all, and leave with a sense of hope.  As M.R. said to me, “Which kind of pees all over the lovers story.  Getting peed on….not good”.  Couldn’t have said it better myself.

Who are we in the end? Are we just a behavioral response to hormones and chemicals that fly around our blood stream making us feel certain emotions? or is that just us thinking we are rather then really feeling anything beyond just a bunch of indications?  Are we to trust an emotional state on medication/drugs? Is it making us believe in something? or is it just heightening a possible reality? Prebble certainly seems to think we need to just go with it and dive in, because we really have no choice.  The Effect certainly had an effect on my brain that night, and caused me to ask myself all kinds of questions as I strolled home in the rain. (Or was it just those pesky brain chemicals playing havoc on my soul.) “The only thing I know”, said to me by my dear friend, A.M., after this play, “You will never feel so crazy as when you fall in love”. And I think Prebble and I can whole heartedly agree with that.