The Streamed Love Never Dies Tries Desperately to Rise Up to Paris, But Lands in Coney Island 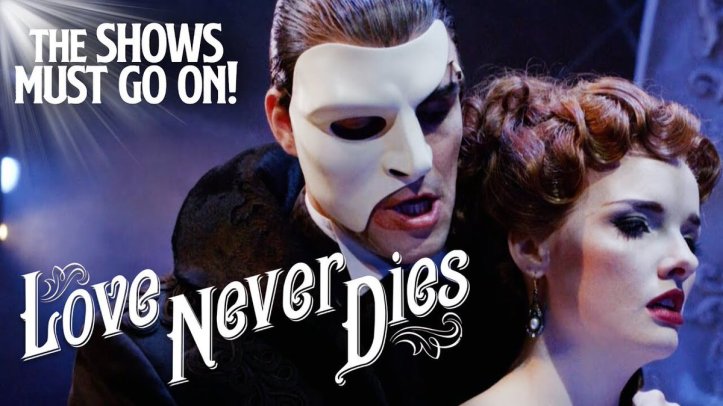 Now I can’t say with all honesty that I was super excited for this streaming adventure this weekend. As I wrote in my posting last weekend, I did have some connecting history with The Phantom of the Opera, now including the streaming experience from last weekend which restored a lot of my love for the piece.  It’s melodrama in the highest order, but that sumptuous production, the 25th Anniversary Celebration at the Royal Albert Hall was most impressive in its staging and performances. It still isn’t my favorite piece of musical art, I’m sorry to say, but I now don’t think of it as ‘dusty’ as I had in the past. It actually was impressive and illuminating. So when it was announced early last week that the next Andrew Lloyd Webber streaming event on his #ShowsMustGoOn YouTube channel was going to be Love Never Dies, the sequel to his mega-smash Phantom, I was more curious than excited. The West End debut got a lukewarm reception, but this presentation was filmed later in Melbourne at the Regent Theatre after its West End debut and after some significant retooling. I will add, that walking into this show (or sitting down in my living room, to be honest), I expected to have a similar reaction within. Turns out, a lowering of one’s expectations does this production a whole lot of favors. I was, surprisingly, generally pleased, well entertained, but not blown away by any means.

The lush, gorgeous strings played strong, delivering what was expected, right from the beginning. It was clearly its own thing, but it did give us a connection to the iconic original music. He’s there, from the get-go, standing proud, silhouetted against a misty gothic world. Masked and singing full throttle as if he just stepped out of the 1980s, he shares his heartbroken soul with us, tortured by the absence of his true love and former student, Christine Daaé. In the achingly dramatic “Til I Hear You Sing“, his voice carries the desperate longing to hear her sing again, and we easily feel his pain. Beautifully voiced by the debonaire Ben Lewis (West End’s Company), the sound is exquisite and rich, bursting forth with just enough tinting from the Phantom to make us feel well cared for in the sequence. I was about to say, “but then it all shifts“, when in reality what follows is something compellingly different, although this Phantom remains as true to form as one could hope for and imagine, but living in a different time, place, and style.

We find ourselves thrown into an abstractly parallel universe, where opera has been replaced by a sideshow oddity kind of entertainment down in Coney Island.  Someone that resembles a toy soldier beacons us into the carnival wonderment that has been marvelously redesigned and created by director Simon Phillips, choreographer Graeme Murphyam, and designer Gabriela Tylesova. It is called Phantasma, and a trio of freak show performers; Dr. Gangle (Dean Vince), Miss Fleck (Emma J. Hawkins), and Mr. Squelch (Paul Tabone), take us deep inside the magically cavernous space, introducing us all to the wonders of “The Coney Island Waltz“. It doesn’t feel like the same show, but the artifice has something compellingly similar in its core; a dark sinister quality that although isn’t gothic, it’s something quite emotionally close.

It’s a spectacular alteration of style, and even though the opening cacophony of altered musical sounds and visuals are almost overwhelmingly different and carry on a bit too long without any explanation, the distorted new vision is arresting, albeit over the top. The reason we find ourselves in such a different local is finally unveiled to us by the stern Madame Giry, forcibly portrayed by Maria Mercedes (Regent’s Sunset Boulevard). She explains how she and her daughter, Meg Giry, played by the very game and charming Sharon Millerchip (Sydney Theatre Company’s Into The Woods), Christine’s dancer friend from the Paris Opera, had smuggled the Phantom in from France to New York City ten years ago and assisted him in gaining some stability and success in the very different world of Coney Island.

The Phantom’s vaudeville show, which Madame Giry orchestrates features Meg who dreams of winning over the crowd, and the Phantom with their performance. It’s “Only for You” is what she sings when hearing that her friend and, I guess, her rival, Christine, has been lured to New York City to open Oscar Hammerstein’s new Opera House. In one of the more compelling harmonious moments of multi-layered conflict and intention, Madame Giry angrily expresses concern that Meg will not be able to hold the Phantom’s attention with Christine’s arrival, but Meg ignores the warnings and looks with joy and excitement to her old friend’s arrival after  “Ten Long Years“.

Christine arrives, finally, with Raoul, her husband, and their young son, Gustave at her side on a ship from Europe, and climb in, hesitantly into an awaiting black vehicle that has been sent for them. It’s a visually arresting scene, but way over the top for what it is, and overly filled to the edge with dramatic clashes and conflict. As Christine, Anna O’Byrne (Sydney Opera’s 60th-anniversary production of My Fair Lady) cuts a beautifully and stylishly silhouette, but their marriage is fraught with tension, far from the place we last saw them when they escaped their last run-in with the Phantom. Raoul, portrayed by Simon Gleeson (West End’s Les Mis) is testy and on edge, constantly snapping at Christine and their gentle yet needy son, lovingly portrayed by the gorgeously voiced Jack Lyall. It’s a shame their marriage is not painted in a less obvious stroke, setting up a clash between Raoul and the Phantom that would feel less certain. The battle feels in a way already settled before Christine even comes face to face with her former lover and teacher. It plays down the drama and siphons out any sexual or romantic tension as we have a hard time embracing the bitter and mean-spirited Raoul from the moment he steps off the ship.

Once the Phantom easily lures Christine away from the overly spoken-about Hammerstein Opera House to sing one song at his carnival ride of a theatre, the other mystery of the show gets tossed out quickly and again, without any tension attached. It revolves around the origin of the musically gifted ten-year-old Gustave, not surprisingly, and with that said, all that lays in between Christine’s arrival and the finale is pretty obvious and easy to guess, or at least understood in a House of Mirrors kind of way. The part you can’t guess is how lovely yet unremarkable the music by Andrew Lloyd Webber and lyrics by Glenn Slater truly are, and how most songs don’t advance the plot up and around the story, as much as the actors do on that fantastical multi-layered set creation.

There are few strikingly memorable musical moments, and that’s not to say that the score of Love Never Dies isn’t well crafted or luscious in its melodramatic form, it just doesn’t pull you in with as much force as The Phantom of the Opera. That 1980s musical easily seduced us down into the cavernous waterways, jumping gladly into the dark watery shadows with these two obsessive lovers, but in Love Never Dies, we only sit back and observe, enjoying the wall-to-wall Lloyd Webber sound, but never getting hooked. Even with the two or three songs that are great stand-alone numbers, such as the beautifully sung “Before the Performance”, the overall effect stalls within the framework of mild entertainment, but never swooning nor transformative.

It says quite a lot about this show that it has never made it to Broadway. There is definitely a global Phantom-loving fanbase that would eagerly shell out the cash to reconnect to the emotional lives of the three main characters, but they would be jarred by Christine and her childhood sweetheart, Raoul, so out of love with one another throughout. Instead of working up to a real or melodramatically conflict, Phillips concentrates on conceptually spectacular visuals, while ignoring the emotional dynamics. This is particularly true with the lost opportunity for the lonely young son and his real father to share a more compelling moment or a song together once the truth is revealed.

Andrew Lloyd Webber started working on Love Never Dies in 1990, but it was not until 2007 that he actually began writing the music. I heard a tale about a cat on a piano erasing the score, but I’m not sure if that is true or a dramatic reading of an artist blocked. Regardless, the show opened at the Adelphi Theatre in London’s West End in March of 2010 to mostly negative reviews, dashing all hopes of a planned Broadway opening soon after. But the subsequent Australian production, filmed here for our streaming pleasure, features a new director and an entirely new design team, with heavy revisions granting the production more positive reviews. The original Phantom had a number of awkward plot points that never really made a lot of sense if you stopped and thought them through, but the emotional and sensual journey kept us moving briskly through the tunnels of love. Here the exquisite performances hold us, especially O’Bryrne’s thunderously good “Love Never Dies“, but then the show drops us down off the pier (that I didn’t know was a pier). We don’t see or feel the same level of grandeur. Beauty has been chosen over genius, just long or often enough to see the clumsy mechanisms behind Meg’s final ridiculous jealous actions. The Phantastic carnival masks are shed, and the abstract shiny surfaces that are pretending to be far more beautiful, are revealed to be just staging pieces, not as glamourous as we first thought. 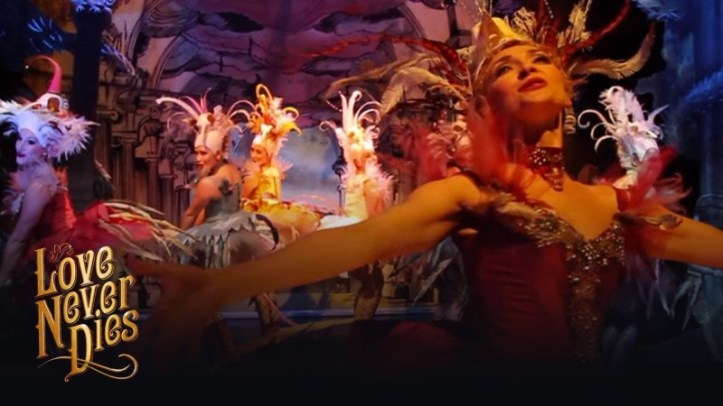